Get it Pappin aka It's A Slow Blogging Day

This morning I hit an all time record of snooze buttons before actually getting out of bed - 6 to be exact. I finally woke up to KRON news' Evelyn Taft saying it would hit the 70s inland. The sun was shining through my bathroom window, and Bob Marley was playing full blast on my laptop while I showered. It was so nice outside that I was able to break out my strappy sandals which haven't seen the light of day since last May. If I was still in college, it would've been one of those mornings where I didn't go to class and laid out in the grass or went to the beach instead. But forget all of that. 'Cuz nothing says "Good first monday morning after daylight savings time" better than a 9am gyno appt with a male doctor. FML. 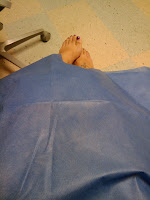 So as I'm sitting there butt-booty nekkid underneath my ever so fashionable hospital blue couture waiting for the Dr. (can I just say this is the first time a man has ever made me wait naked?), I couldn't help but think back to my very first papsmear. I had come in with my bf at the time for moral support and we were both absolutely mortified. I was still in h.s. and even he had barely been in my va-jay-jay so I was not happy at all that some hippie doctor with hemp earrings on was going to be in there as well.

I vividly remember the first words she said to me: "Sweety, what he puts in there is a lot bigger than what I'm about to put in. And if it isn't, well then we have a problem." And just like that, my apprehension subsided. Almost 10 years later, I've gotten quite used to a complete stranger being all up in my bizsnatch considering I get waxed routinely, but one thing I will never get used to is enemy #1: The Speculum.

I'll say it again. "The Speculum." Dun.Dun.Dunnn. I dunno about u, but it totally sounds and looks as uncomfortable as it feels. Maybe I just have a small vagina opening or maybe I'm just a wuss when it comes to people sticking foreign objects in my nether regions (can u blame me though?) but either way, I am not a fan. I don't like that kind of screwing around down there. It's cold. It's uncomfortable. A little diabolical. And everytime the Dr. adjusts that screw on the bottom and I can HEAR it, it's worse than hearing them drill ur teeth at the dentist. U would think that they'd redesign this thing by now. 'Cuz it looks like some sort of medieval torture device. Perhaps some soft rubber to cushion the duck bill looking part? Or maybe manufacture them in a floral print or pastel color to at least give u the impression that it's ur friend.?!

But then I thought maybe it's not meant to be ur friend. Maybe for those who are visiting the gyno for reasons other than ur routine pap (i.e. UR A FUCKING SLUT), it's meant to scare u and be a constant reminder that until u stop being a whore or stop being allergic to condoms - that The Diabolical Duck (which is what I will be calling it from now on) will be waiting *insert evil laugh here*

As for myself? My aunt recently found a cancerous lump in her breast and will be having surgery for it this week. Because I'm a pranoid freakazoid I asked the doc to check that out as well and survey says: I'm lump free! And I will definitely be crossing my fingers that my aunt will be lump free soon too.

"Maybe for those who are visiting the gyno for reasons other than ur routine pap (i.e. UR A F*CKING SLUT...)"

I laughed out loud when I read that last part - ah ha ha ha!!!

I heard that newer speculums are made out of plastic and it warms up so it wouldn't be as uncomfortable as sticking a cold metal think up your lady-good. HAHAHA
And I've never had a pap before, but I heard it hurrrrts. Does it? My mom thinks I'm too young to get one, and I'm 18. I swear, she's in denial that I'm having sex. >.<
AND best of luck for your aunt!

I read this in class and choked on my water...lmao thanks for that.

woahhhh...your doctor still uses a steel one...ask your doc about a plastic speculum...so much better!!!

that was by far the best description of the most awkward visit a woman has to make to the dr.

i'm glad i was able to make everyone laugh at my own expense lol and i mean that in the most NON sarcastic way too.

im bout to bring my own plastic, floral print speculum to my next pap shit.

and feebs OMG that was the damn description i was looking for, so simple but i couldn't think of it.

p.s. melissa i'm not sure when "too young" is but i started getting mine when i became sexually active. u can go to clinics without ur mothers permission just make sure to do thorough research. it's not so much that it hurts, it just feels really uncomfortable.

your suppose to go as soon as you become sexually active. otherwise you should start getting pap tests once youre 18.

also, though i love your blogs abi, and im sure your comment in relation to yearly checkups and being a slut was probably for a good laugh, im also unsure if your partly serious. getting a yearly checkup doesnt mean your a slut or needing to wear a condom. you can get hpv/cervical cancer even if you use condoms, been with the same guy for 5 years, or never had sex at all. jsut saying. your blog goes out to alot of readers, young ones too probably, so you should get your shit straight.

anonymous - comment gladly accepted. however, u read it entirely wrong. i never said that getting a yearly pap means ur a slut. i didn't have sex for almost 2 years but still got checked because i was due. so just to clarify: youngins who are reading: GETTING A YEARLY CHECK DOES NOT MEAN U ARE A SLUT. THEY ARE GOOD FOR YOU. THEY ARE THERE FOR A REASON. THERE IS A REASON WHY YOU'RE DUE TO HAVE ONE YEARLY (although now every 2 years. i actually liked it yearly better).

i simply said for actually sluts or lemme rephrase, for women or even men who get checked up for OTHER reasons ASIDES your ROUTINE pap (which is what i believe you were referring to) like if u sleep around with multiple partners that they hardly know using no protection etc. etc.