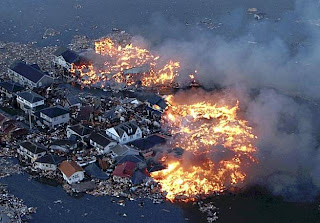 I live walking distance from the beach, run it every weekend, can't swim, and am a hypochondriac. So imagine the disarray I felt this morning waking up to Darya Folsom announcing the first wave of the West Coast tsunami to hit San Francisco at 8:08am, which is around the time I leave for work. I know the media tends to sensationalize everything, but knowing the devastation in Japan had me worried enough to grab my phone and text everyone I truly cared about a simple, "The tsunami is probably being blown out of proportion, but just in case it isn't - Love you guys!" I knew everything was going to be ok, but I didn't feel too cheesy for sending the text because these were people I should be saying I love you to everyday anyway.

I however, did feel disappointed in myself. Because when it got down to the last person on my list, I hesitated, and eventually didn't text them. While the biggest waves to hit the Bay Area were only 2 feet tall, I allowed myself to drown in my own anger, hurt, and pride. Just because someone is too much of a selfish coward to own up to their mistakes and take responsibility for their actions, it doesn't mean I should carry their burden on my shoulders. If something tragic had went down today, I would've went down with a heaviness in my heart.

I must admit, I am ashamed.

I don't know whats worse, the fact that I could die tomorrow without so much as my book proposal finished, the fact that this person doesn't realize the magnitude of what they've done (or either way just doesn't care) , or the fact that given another chance I still wouldn't let this person know how I feel and rather carry it with me to the grave.

I know whats worst though. Having been directly affected by the disaster in Japan. So let this be a lesson to everyone. To be kinder. Love stronger. Hustle harder. Say sorry and mean it. Appreciate more and worry less. To regret the things you didn't do instead of the things you've done. And most of all, to eliminate regret entirely. Just because I can't do it this time, it doesn't mean you can't. You may not be floating on your mattress in the Pacific Ocean somewhere, but the resentment you hold in your heart will be heavy enough to drown you above water.

**My good friend from Adapt will be donating 100% of proceeds from the sales of these shirts to Japan disaster relief. If you would like to contribute, you can do so here.