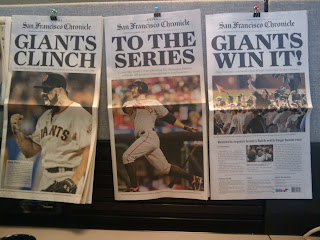 As said many times before - I love playing baseball... but I do not care for watching it (at all). And I think I would be a lot prouder of this accomplishment if there were not so many (I mean a ridiculous number of) bandwagon fans shouting out the team on Facebook, Twitter, and in texts, calls, local spots, etc. Someone like you Abi, it is great to see. Win or lose, you have remained even keel. If the Giants win... you support. If they lose, you still support (at the games and all - and there is all kinds of proof on this blog). That is the true definition of a fan. But these bandwagon "fans" are killing me - shouting out the Giants as if they are folks like you... when they cannot even name more than three players (if that) on the team without resorting to Google. They never even watched a game during the season - let alone one in the playoffs prior to the Phillies or Rangers games. Yet now they are hollering GIANTS! SMH. It is one thing to be proud of a team from the Bay. It is yet another to act like you are a fan yet have never even supported or paid attention to the team before the Phillies series.

My congratulations to you and YOUR team - you deserve it... THEY deserve it. While proud... I am not going to act like I am a fan of the Giants or baseball in general (now football is an entirely different story for me). If bandwagon folks rep anything at all... it should be The City or The Bay.

It is just wild to see.

@7 - aw thanks for recognizing that. at this point, i'm just so happy i don't care anymore. or at least not as much lol. i'm still somewhat in shock. trying to adjust and let it settle in. kinda wish the torture didn't end though. definitely bitter sweet.