You Tube of the Day - I Invented Sex

After reading about Trey Songz' "I Invented Sex," video and seeing numerous Facebook statuses (statuses? is that a real word? probably not. oh well) regarding it I decided to finally check out what all the hoopla was about. Honestly, I didn't get it until 2:18 which just so happens to be the same exact screen shot in the YouTube below. UM HI. He's like staring at me and shit. I feel like I should put on makeup or something lol. I'm not even a hardcore Trey fan but he can definitely git it. Ladies, if yall haven't checked out this video yet, early Merry Christmas to you! Fuck, I could use a cigarette right about now ... and I don't even smoke.

Which totally reminds me, I met Trey back when "Can't Help but Wait," first came out at what used to be Loft 11. It was a Tuesday and while there was people, it wasn't anywhere near packed. So much that I was able to take a flic with the man. Granted I ain't no chicken head but DAMN could someone have told me to slap on some damn makeup? Blot that hot mess of a face? Or at the very least BRUSH MY FUCKING HAIR? *SMH* There's some obsessed Trey fan out there hatin on me right now sayin I ain't worthy and she's probably right lol. 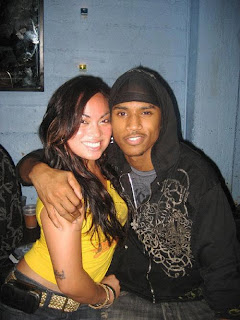 Labels: - of the day

But I [apparently] sure wrote something that captured it.