Weekend in Pictures - ALL BLACK AND ORANGE EVERYTHANG.

I'm sorry if it's all I've been talking about lately, but my life has been eat. baseball. sleap. lather. rinse. repeat. for the past few months. Despite chokin on Friday (A GAME I WAS FUCKING AT!) I had an awesome weekend. Good weather. Good food. Good folks. Like I said, life is gigante.

Friday started off with a little pre-gamin. No, not at MoMo's, in front of Safeway with the rest of the broke fans who didn't want to wait in a line that rivaled a Vegas club. Heem and apple juice FTW! 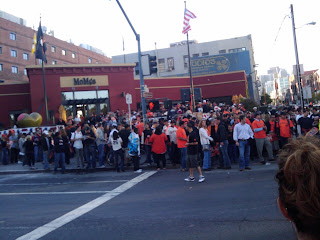 Right about now is when I started feeling curve balls in my stomach. The anticipation for the game was KILLING ME. The energy was retarded. I felt like I was playing that day. 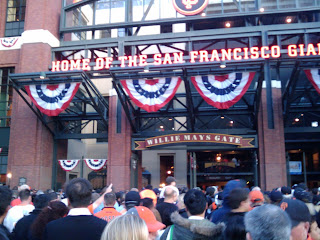 The crab sammiches behind the bleachers are TO FUCKING DIE FOR. You can tell by the way Rach's eyes are closed as she takes a bite outta hers. Pretty sure they rolled to the back of her head afterwards lol. 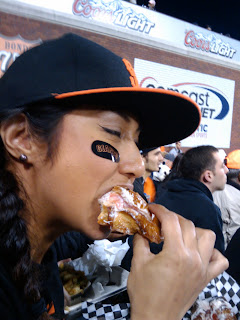 If there's anything I get at the ballgames, its always BEER. No matter how ridiculously overpriced it is. 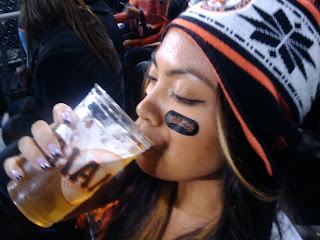 It was a HARD game to leave. Although it was 4-0 for the longest time, I never felt at ease. EVERY GAME is that last game in 2002 for me. So I make sure not to celebrate until the entire game is over, the water cannons go off, and I hear Tony Bennet singing. Cain was ok. Romo dun started the downward spiral. And the chemicals in Wilson's beard dye must have affected his brain. I WAS PISSED. I always feel like it was SPECIFICALLY MY FAULT whenever we lose a game I'm at.

But while everyone else was wah-ing or talking shit, I just kept tellin myself it's aite. We can do it too. We'll hit 'em where it hurts - HOME. And that's exactly what we did. Honestly, God must be wearing an orange robe or something because yesterdays game was something short of a miracle. Friday hurt, but I'm sure Braves fans are reeling over their loss. I was so sure they took it. Imagine having the BEST home game record, and then losing to the Giants of all teams who are known to NOT come through in the clutch.

IT WAS AMAZING. Giants came up from behind, just the way I like it. Hah. And Conrad? Oh, someone give him the Willy Mac award lol. Poor thing. 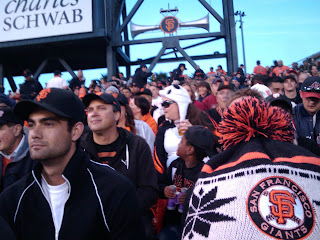 This video gives me goosebumps. If you're a Giants fan it should give you some too.

And this video seriously almost made me cry. I wish I could've been in it.
DON'T STOP BELIEVING! THIS COULD BE THE SEASON. BLACK AND ORANGE TIL'I DIE!

GAME 4 TODAY. LET'S GET 'EM. I WANNA SEE ATLANTA PAINTED IN ORANGE AND BLACK!
Posted by Mouf.Peace at 9:42 AM

hello man in the 5th picture down...

Seriously. I was talkn 2 him all night but cuz I was so engulfed in the game I dint notice how cute he was til I uploaded this pic gaaaah

yea damn, he's a cutie. lol and the giant's anthem, they played it on KNBR 680am radio last night hahaha lol