I'm going to take one for the team here and act like a complete, and utter GIRL in an attempt to get you female non-fans interested not necessarily in baseball, but at the very least - the Giants lol. Because asides from the fact that they've got talent, heart, drive, and dynamic, with just the right amout of "fucking crazy," they're actually pretty fucking handsome as well. So without further adieu, lemme share with you my personal starting line up:
Jonathan Sanchez . - aka the B.D. aka my favorite aka Latino Heat aka Viva la Sexy aka mi amore Yonathan. Maybe not the best pitcher, especially since he's been fuckin up a lot lately but he's definitely contributed to the post season success. And if he can just focus back to his no-no last July, I may accept the wedding proposal. 6'00", Puerto Rican, and have you seen the way he licks his fingers before every pitch? Yah baby you, curve your balls here ANYTIME.

Brian Wilson - aka B-Weezy aka the Bad Boy aka FEAR.THE.BEARD. aka "the one guy on the team that looks a little OFF". I've always known who he was but never looked at him in that way until the beard started growing in. What way you may ask? A "Please pitch on MY mound," kinda way. A "I wanna sit on your flavor savor" kinda way. Yes, I fell victim to the "bad boy," and I am not the least bit ashamed.

Andres Torres - aka Rach's B.D. and another beloved member of Team ESL who is more than welcomed to speak sweet Spanish nothings in my ear. Yah, he wears shmedium v-necks and a big ass chain from Claire's when he's on the field but you gotta admit, THAT BOY CAN RUN ... straight to my bedroom if he wants. And sure, the dude got donk, but hey he needs something to balance that big ass bat of his. No, for real, he swings the biggest bat on the team. Pun intended.

And on the bench by popular demand ...

Travis Ishikawa - aka a hapa lovers fantasy. Japanese and white don't mind if I do! Shame that he's only in for 2-innings or less but he hasn't managed to piss me off during the games too much lately. Besides, this post isn't about stats and performance. It's about eye-candy, and I'm suddenly craving Mochi.

Pat Burrell - aka Pat the Bat aka "the handsome older man," as he's been described by several of my friends who don't only wanna just pat his bat, it but stroke it too.
Aubrey Huff - aka Huff Daddy. My mom has a crush on him, and if I was her age I probably would too. Matter of fact, he's my "handsome older man," crush on the team. Any man that rocks a red thong in the locker room has to be an ANIMAL. Take that, take that, take that.
Buster Posey - if Wilson's the bad boy, Posey def has to be one of the good boys. And heyyyyy we want some Po-seyyyyyyyyy. Actually, me not so much but the rest of the female world does. I still think he resembles Napolean Dynomite but if you've ever been inside AT&T Park during a game and look at the signs the ladies are holding, Buster is what it is right now. 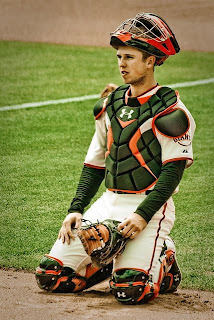 abi. please tell your bd to STOP GIVING ME BEDROOM EYES
i cannot take it.
i just CANNOT.

I don't pay attention to baseball but damn, some of these guys are worth watching a game for. :)

Damn I don't even watch baseball but um I'm watching the next Giants game. Thanks for this lol

Are you gonna include Freddy Sanchez too? LOL!

yesss i'm converting yall one at a time! lol jk. and trust they're so much cuter in action, like in person.

OMGOSH! I love it! your metaphors to baseball in each players description! Too funny Abi. Torres and Ichikawa hottt daym!
Lots of female Giants fans at my work, but I dont know if they can handle your words.

i love how this is all we talked about at the game last week. LOL