Foodgasm of the Day - Broken Record

I love dressing up like a high-maintenance girly-girl and going to fancy shmancy restaurants, I really do! Shit, I need somewhere to floss all these cute dresses and fierce ass heels I buy and there's only so many weddings I get invited to. But about 19.5 hours of the day, I'm really a hoody and kicks kinda chick. I wish I could look flossy and well put-together all the time but fact of the matter is I have no time. So when my girl Ness took me to Broken Record in the Mission, I felt right at home.

This gem of a dive bar looks like any ordinary, neglected neighborhood bar from the outside. Once u walk in, there's a pool table and remenants of a previously played Beer Pong game. I was already sold right then and there. But if u go all the way down the hall to the back of the building, surprise there's a restaurant with the most eclectic menu (although sparse) and friendliest staff. We originally came for the tiger prawn and avocado sammich, but I'm assuming the switch it up every now and then 'cuz it (along with the fried oyster po'boy sammich) was no longer on the menu. However, the crab and corn fritter with avocado sammich was so it was a go from there.

The rest of the night consisted of silence as we became pre-occupied with the basil aoli spread and bacon fries. YES. I said bacon fries. I was so full from beer and crab fritter I only hate half of my sammich (which still tasted damn good this morning btw) - but u know there's always room for dessert! Just because it sounded interesting I had "The Elvis," which is an ice cream sandwhich made with 2 oatmeal peanut-butter bacon cookies (yes i said bacon again) and homemade roasted banana ice-cream. It was a little weird to taste bacon bits here and there but apparently some people like to have their sweet and salty fix.

I'm pretty sure whatever regulars Broken Record has will hate me for writing this blog, and I can't blame them. I almost wanted to keep it all to myself and my close friends too but as a self-proclaimed food connoisseur I felt obligated to share my findings. Just do urself a favor and save the heels and designer anything for a girls night out 'cuz this is definitely a spot to be one of the boys. 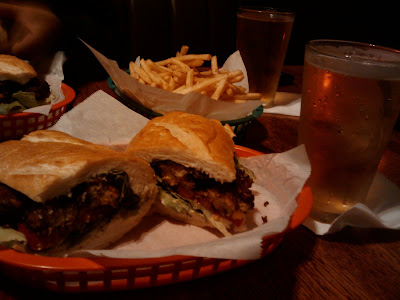 Thanks Abi! I was drooling when I saw your status last night. Lol. Rach & I will be here next Saturday. Come with!

at first i was like...NOOOOOOO SHARING!!! LOL! but its all good...gotta spread the love. so its ok if u cheat on me there. LOL! DAMNIT tho...i had a feeling i shouldn't have given arnold my leftovers. i will never doubt the goodness again. HAHA! did he like it?

dont forget to add when u ordered The Elvis, the cashier said "HELL YEA!" hahaha!