The Truth About Cats and Dogs

Reading my hayati's previous blog reminded me of this one!
Written Tuesday, June 13, 2006 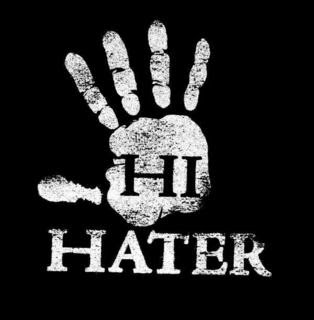 And even then, there ain't nothin I don't say about someone that I haven't already said in their face. Plus, is it really talkin shit if it's true? Aren't we just reiterating the facts? Oh who the fuck am I kidding?

Unless ur name is Amelia Hadi, u talk shit too so don't even try to front.

Quite frankly, if me and u got beef it's 'cuz of some well-justified PERSONAL shit, not no he-said she-said "I seen ur man talkin to her at the water fountain" booshit. Moreoever, if I have ill-feelins towards u, it ain't gonna erase the fact that I acknowledge ur intelligence or talent, nor will u all of a sudden be "ugly" when I know damn well u break necks at the club.


With that said, I've been browsing through random blogs and sadly enough it seems as if there is a whole lotta "hatin" going on. Even more unfortunate, it's always amongst us females.

Oh and if ur one of these females who write about hatin and the progression of women, yet are the first ones to roll ur eyes at me when I come thru the spot please peep someone else's blog. That's just tacky. I get hated on a lot and back when I was ignant, it hurt...until I realized "haterism" stems from an evil called jealousy. Bitches, do u really wanna give me that much credit?

One of the chicks from the BB$ click said, If u ain't gettin hated on, then u ain't doin shit." Halle-luh-juh. And my girl Faye said something along the lines of, "If someone doesn't like u, they won't be happy until ur sad." Amen.

To me, hatin is the act of talking about someone in a negavtive connotation FOR NO APPARENT REASON or motive. It's one thing to openly admit this 'cuz shit, am I hatin 'cuz Paris Hilton is a rich talentless bitch that's famous for the mere fact that she is famous? Hell to the yes. But would I trade places with her? Not for a million hotel chains. However, it's a disgrace to your very womanhood if you make it a point in ur life to constantly find reasons to hate someone, moreover, create reasons for other people to hate someone just because you're insecure with yourself. I'll admit it, talking shit is funny as hell but there's a thin line between people watching at the mall and asking for a beatdown - DON'T CROSS IT.

EVERYONE is competitive by nature. But if we didn't already know, at one point in our lives (At least I'd like to hope for the rest of yall) us grown folk come to realize that if we spent more time challenging ourselves to better ourselves for (U guessed it) OURSELVES and not just to be better than ur man's ex-girlfriend, or the bitch who could've been ur best friend in another lifetime - we would not only be more productive and successful, but more confident and happy as well.

See that fly-chick in the corner of the room with a pearly white smile on her face, bangin body with a bangin degree to match that everybody including u AND ur man is looking at? She ain't worried about u staring her up and down thinking "Fuck that bitch and her fake titties she's probably a ho." Why? 'Cuz she's too busy trying to balance her lucrative modeling career with her upcoming graduate school schedule.

Got the point? Good.

I once read a MySpace headline that read, "The only thing unique about u is ur personality." CHUCH'

We can rock the illest kicks, dopest fits, change up the hair, and occasionally switch up the jewelry errr now and then but no matter how fuckin original u think u are, there's someone out there on the other side of the world, or other side of the city for that matter, that is doing the same exact thing or has already done it 9 years ago. And why try to compete with looks when u can't change the color of ur eyes to make it greener than "hers," or change the plumpness of ur lips to make it jucier than "hers" (Cosmetic surgery aside). And like Kanye said "The prettiest people do the ugliest things,".

Fuuuck, what do I do when I see someone pretty with big ass titties? Ask them to join K.O. Queenz and beg for her to spread the wealth. (Just ask Ness haha).

Not to get all "Superwoman I don't need a man, they're all dogs!" on yall ('Cuz we know that beside every great woman is a great man and vice versa) but ladies remember, "It's a man's world, but women make it go 'round." Some men are counting on catty ass females to remain oblivious to this ideal so that they will forever question their self-worth and ability to function in a state of normalcy without a man in their life!!! Also so that when u catch them cheatin on u, u'll place the blame solely on "The other woman" (Who was probably just as much as a victim as u were) and not the actual person who made a commitment to them. Come on now ladies!!!

And if u weren't aware of all this? It's probably 'cuz u was too busy hatin.
Posted by Mouf.Peace at 1:28 PM

dayummmmmmmmmmmmmm. This was such a good post. You're so right,, females hatin,, it's a diesase.
Everybody's got theirs, and you got yours, females needa learn to focus on what they got instead running the mouth, because frankly, shit ain't attractive.

SO TRUE...especially the Amelia Hadi part.

Truer words have never been said... but did ya notice how prevalent it is among Asian females?

girl i got one of these right now! right now RIGHT NOW! lol

idk how i came across your blog, but ever since i did, i'm hooked. you alwaaays speak the truuuuth! i really appreciate the no bullshit!

sorry- i just used my google account, but its not my actual blog!