It Ain't Nothin but Hip-Hop Music

Along with Rach, Michelle, Cus and every other hip-hop loving soul in the Bay Area, I attended the last leg of the Rock the Bells tour yesterday at the Shoreline Amphitheater. After being un-prepared last year, we got there around 2:30-3pm full off of Kalua Pork w/ Cabbage from the ride but still toting the MOST snacks ever: strawberries, grapes, string cheese, 3 different kinds of chips, masuibi, and Capri-Suns, to hold us down for rest of the day. Found a dope spot at the very front of the lawn smack-dab center stage courtesy of Ferl and company (good lookin!) and set up shop. Nothing but food, beer, sun, friends, and ear candy the rest of the night! 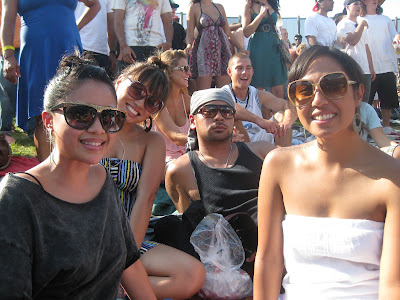 I unfortunately never made it to the Paid Dues stage because it was too crowded to stretch out my legs, what more walk through thousands of people but I was fortunate enough to catch Super Nat, House of Pain (not really feelin that La Coka Nostra, sorry I'm just not that angry of a person lol), Slick Rick, Reflection Eternal, The Roots, Big Boi, Busta Rhymez, Damian Marley, and my personal fave - Nas. 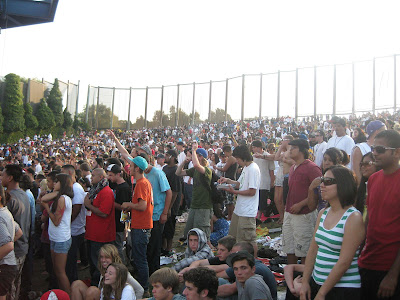 Super Nat, who ever since '98 will always be the undisputed freestyle champ of the world (sorry Juice ur next) in my eyes did his usual rhyme'n 'bout random objects given to him on stage off the top. Slick Rick wasn't even on the roster so I was pleasantly surprised to see him and his chains on stage doing the classics (even though he kept saying "Wassup San Jose!"). And what I respect the most about Slick Rick is the fact that even though he's such an old school icon, he is still open to the "new school" folks and respects their hustle. Reflection Eternal, I believe was next and I really wish I had a bleezy in hand to pass when he did that Kanye Get 'em High track but I didn't, so instead I got lost in the zone when they performed my fave track, The Blast. (This pic of Talib is for my girl Gail haha neener-neener!) 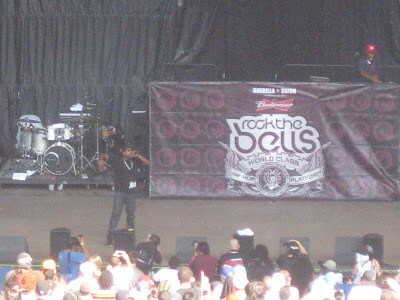 Next up is one of my favorite bands ever, The Roots. As much as I love the art of DJing, nothing can compare to live instruments and talented musicians. Black Thought and the gang did an everlasting set that entertained me enough to almost forgive Common for his no-show - althought they didn't play my fave Roots song, Act Too Love of my Life. Then came Big Boi who definitely pulled his weight even without Andre by his side. He even did a few samples from his upcoming album which sounds like CRACK, and I ain't even a huge Big Boy fan! Also ... he announced that OUTKAST has an album coming out, I cannot wait! Busta Rhymez was next and what can I say? He's already loud and large on tv so what more live? I kid u not, all of us were laying on our banigs when his John Jacob Jingle Heimer Smith ass came out on stage and scared us into standing up his entire set. Dun near had a seizure and shit. We all needed a nap after his performance. I absolutely loved his energry, and even though he's not even on my top 5 list of fave emcees he's def up there as top 5 entertainers. 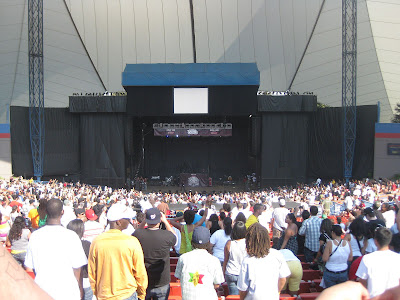 Lastly, was the main event - a sort of duet performnce between Nas and Damian Marley to promote their upcoming album Distant Relatives. I'm a huge reggae fan but I ain't even gonna front the only Damian Marley song I knew prior to last night was Jam Rock. However, reggae always puts me in a chill mode and that's exactly how I felt. I love the idea of intertwining their performances together, after all, Hip-Hop stemmed from Reggae. However, I think I would've enjoyed it more had they had their own seperate stage time. There's just certain Nas tracks that only work on it's own with its' original beat and not mashed up with something else. I will say though - hearing Nas perform One Love and then hearing it transistion into Damian performing his father's song One Love was LEGENDARY to say the least. I literally felt chills.

We left early so I didn't catch much of Nas's solo act but I saw him last year so I'm sure it was just as illmatic if not more. I would be sad about it, but by doing so we beat an hour wait in the parking lot and got home in no time. All in all, I'll leave u with something The Rula said after playing some Jim Jones and Shawty Low.

"Ain't nothing wrong with new school, just don't forget about the old school."

Now Ricky Walters how can I forget my first (musical) love? 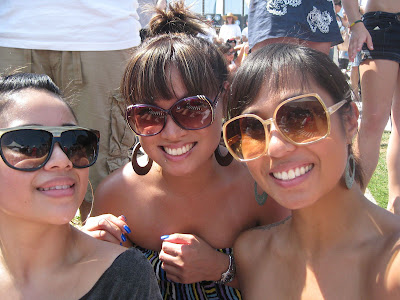